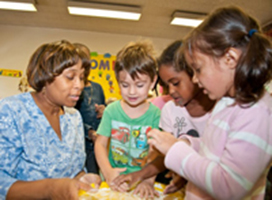 LaJuan was born and raised in Washington, DC and attended DC public schools. After High School, she completed nearly two years of education at the University of the District of Columbia with a concentration in the nursing department. She worked at First Baptist Child Care Center for two years. LaJuan accepted the position at School for Friends in 1986. She would like to pursue further education in the teaching field. She has also participated in multiple workshops over the years and she received her CDA credential. LaJuan is married and is the proud mother of three children, Jamar, Daevon and Jacqueline.